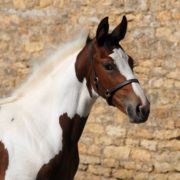 It has certainly been busy summer at Camrose Stud.

We have had the pleasure of having another mare and foal of Barbara Keller’s of Gestut Hasenacher in Switzerland to stay for the summer.
Last year we had two mares and a foal for Barbara to stay who both went home in foal to Sambertino and Semper’s Spirit respectively.
Our visitor this year was the lovely ZfdP mare Suse (Semper – Astek) who arrived with her 3 week old AES colt foal by Barbara’s Thoroughbred stallion Dansant xx. Dansant, who had been racing in the colours of Barbara, was a six time Listed winner, placed in Group races, the highest level in racing.
We are delighted that Suse is now in foal to William Fox-Pitt’s Rio contender Chilli Morning for 2017. A big thanks goes to my super vet Peter Sclater who used just one dose of frozen semen to get her in foal, not forgetting he also had my own two mares in foal first time with chilled semen from Germany.
Suse is homozygous so the Chilli Morning foal will also be coloured!
We also presented Suse for mare grading with the Oldenburg Verband last week and we are delighted to say that she was accepted into Studbook I. (Photos to follow).
Suse and Bernardino will be leaving us at the end of September to journey to Barbara’s stud in Switzerland and we shall certainly miss them.